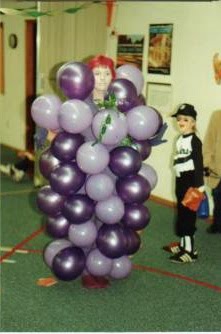 This Halloween was the first time I’ve been able to hand out candy. Truthfully, I trick-or-treated much older than most kids do, and one of my final years, I was wishing I had stayed home to hand out candy. Until, of course, I got four pounds of candy for myself and that thought quickly vanished.

The kids were greedier than I expected them to be. And they had no right to be, as I was giving out a handful to each kid, rather than one measly piece. One little girl said, “I want a tootsie roll.” I wanted to tell her that the fun size candy bars I just gave her were much better and that tootsie rolls are like the scum of Halloween candy. Well, that and sweetarts.

The costumes were nearly all straight out of a bag, but there were a few kids who just threw together things they had from home: a mummy of toilet paper, some sort of astronaut (but really just a kid dressed in all silver). These kids reminded me of myself and my siblings. We didn’t buy costumes, but rather pieced something together from household items.

I would be a hobo, or a cowgirl, or wear Chad’s “Spoilers” baseball uniform and carry one of those jumbo plastic bats. Once, the four of us wore t-shirts with spiders on them, and mom added some plastic spiders with the glue gun. I have no idea what we were supposed to be. One woman asked me if I was spiderman, and I said, “no” and dashed off with my candy.

But despite all our efforts, the best homemade Halloween costume was my mom’s: 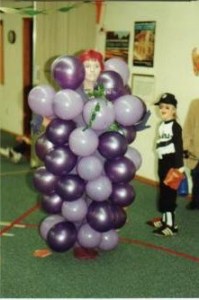 Oh yes, and that’s me in the Spoilers uniform with my plastic bat. Only wishing I too could look like something from a Fruit of the Loom commercial.

2 thoughts on “Halloween on a budget”