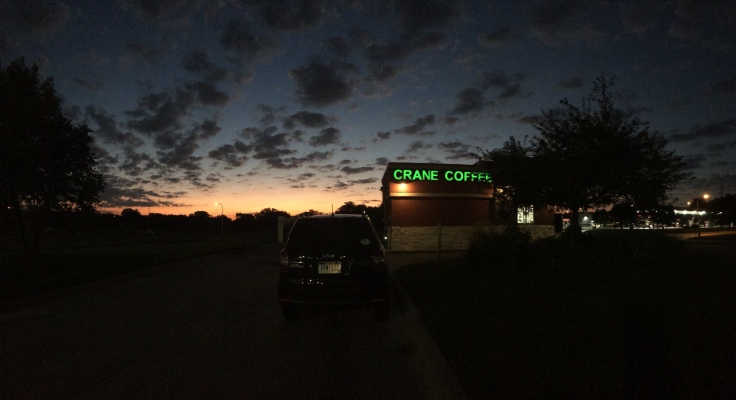 Last Saturday, I got a text from my bakery manager inviting me to an event that would take place four days later. I was told to dress in business attire and given the address to an event hall. I couldn’t go, I replied. Ilya Kaminsky was in town that night and I had to see him. Being a writer is my job #1. And I didn’t know what this mysterious event was.

In the following couple days, there was much speculation among the Crane Coffee employees about what the event could be, but no one had answers. When I asked our COO, she couldn’t tell me. A couple of us speculated that she and her boyfriend were buying the company and already I was happy for her. She is my age with two children herself and has worked for Crane for many years. It has been her dream to own this place she loves so much.

“Maybe we’ve been sold to Scooter’s or Starbucks,” one employee speculated but I waved it away as impossible. When I started, I was told in training about Crane Coffee’s legacy as the oldest coffee shop in Omaha. It changed owners shorty after Steve Hammerstrom died. After his wife Paulette tried running it on her own but ultimately decided to sell it. A condition of the sale was that it would remain a local coffee shop, I was told. That it wouldn’t be sold to a corporation. So of course, that was impossible. Surely it was Rachel who was buying it.

I started working at Crane Coffee in July of 2015 at their Pacific location. It was my first job after my second son was born. I had bowed out of corporate work and stayed home for awhile and then decided if I was to work a job, it would be one I enjoyed. I was a regular Crane Coffee customer at the time and Rachel, who hired me, was willing to give me only weekend hours so I could be home with my children during the weekdays.

The Pacific location I worked at is what we call “Corporate” because it has an upstairs with desks and filing cabinets where Rachel and our accountant worked. While I worked there, I got to know the owner, Keith, a little when he visited. He told me his family is in the coffee business in the Kansas City area so buying out Crane Coffee here made sense for him.

I left Crane Coffee in August 2016 to attend grad school. By then I was working at their Walnut Grove location on 153rd and Q, right near my house. Keith didn’t come in to that location very often and I thought maybe it was because I wasn’t at corporate any longer but I was told he was often out of town since he also has a home near Branson, MO. No matter, it was Rachel who each of the eight store managers reported to, it was Rachel who made sure everything ran smoothly.

While I was in grad school, a Jeep plowed through one of the Crane locations, some kid driving 60 mph through a parking lot on his way to work after huffing compressed air. It was Halloween 2017 and Rachel was in the store that day bringing treats to the baristas. She was thrown from the building and spent the next few months in a coma. After her recovery, she was back at Crane Coffee. As long as I’ve worked for Crane, she has been its axis.

Crane stayed Crane and when I finished grad school, I came back to working weekends for them at Walnut Grove. When my youngest started Kindergarten and I was able to work more hours, they offered me a position in the bakery as well. The people who run Crane Coffee are very good people who work to retain their employees and build a community within each of their stores. They love chatting with their employees and customers, getting to know everyone. It’s personal, a true home if you want it to be. It was a Crane Coffee employee I recalled what I could remember of the worst night of my life to, sobbing on her shoulder. It was Crane Coffee employees who came over after my really hard break up. Crane Coffee employees were there to cheer me on at my book launch.

So back to Wednesday night. I was in the standing-room-only Art Gallery at UNO to see Ilya read his poems when I got the text from my manager that Scooters had bought Crane Coffee. No more bakery. No more job. I mean I could probably kiss some corporate ass to work for Scooters but since when does a girl like me work for a place like that? Frozen bake items and burnt espresso and not giving employees raises and massive turnover. Fuck off.

None of us had any warning. Not even Crane’s four “corporate” employees. We didn’t know Crane was being sold, that it was even on the market. We were just told on Wednesday night that Scooters owned our beloved stores as of November 1st and I got a text from some lady in Scooters corporate yesterday asking for my email address and shirt size. So much for the promise to never sell our local coffee shop that so many of us loved. I’ll give you one guess who the CEO for Scooter’s is. Yep, Keith’s son, Todd.

Yesterday morning they announced the buyout in the news. I didn’t work at the coffee shop yesterday but while I worked today customers were distraught, telling us how much they loved us and the tradition Crane has been to them and what is going to happen to us and we didn’t know what to say but to shake our heads and commiserate. Some of the customers responded to the news on Crane Coffee’s social media pages but Scooters had already taken over Crane’s accounts and sent auto replies to the people who had built this business–the customers we know by name and car and drink and dog.

Tomorrow I will go back to Crane, to the place I’ve known as a home. I’ve been at Walnut Grove nearly every weekend for the last sixteen months, singing along to my music while I steam milk or joking at the window with my customers.  I will sadly recite the same lines to my favorite people: when the takeover is happening and that I’m distraught too and that it really is the end of an era. And when they inevitably ask me what I’ll do next, I’ll tell them the truth: I don’t know.

2 thoughts on “how they killed Crane Coffee”