Four years ago, I came home from my second job to see this wriggly little puppy whining in a kennel. He quickly became mine and Steve’s baby. We spoil him. Every morning, he gets part of Steve’s egg. Every evening, he gets a couple pieces of the meat du jour. We take him on a walk six times a week.

He runs figure eights around the two trees in our backyard when Steve mows and I weed. He has his own chair: the leather one in the library. He lies there when we’re gone and watches what happens out the window. Then as soon as he hears a Hyundai or a Saturn, he jets to the door leading to the garage. 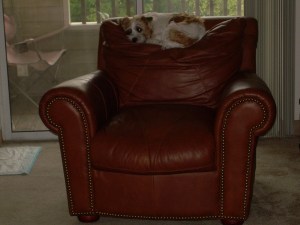 He lies next to my feet every night. Sometimes I wake up and see his head next to mine on the pillow. When Steve and I watch a movie together, he eats popcorn with us, then lies on Steve’s lap.

We bought him this bed, but this photo op was the only time I actually saw him in it. He much prefers our body heat. He is attached to us. We don’t think he’d ever run away because he would miss us too much. We are his everything.

I was at the pet store today, picking him up tether so he can hang out in the front yard with us, too. I don’t know if it was the smell of dog hair or the cooing over puppies, but I wanted another one. A brother for Tucker. Perhaps this is similar to the moments when moms of humans decide it’s time to start trying again.

But a puppy wouldn’t be a brother to Tucker anymore. It would be more like a nephew or a second cousin. Four years for a dog makes him 28 according to human standards. He outgrew me. He is now older than me, lazier than me, and I imagine even more cynical than me. Maybe when he lays his head on my stomach, it’s because he knows I’m sad and he’s comforting me. Stupid me: I had always thought I was mothering him.

In these last four years, he has become a fixture in our household. He knows all our friends and has his favorites. I concur I’m safe if I hear a noise and Tucker doesn’t deem it worthy of his barking. He has moved with us three times, and finally found home with us. He has shoved his way into pictures when he wasn’t invited 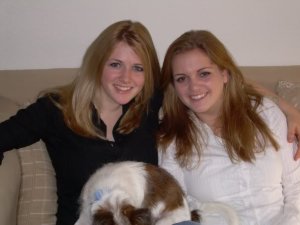 And acted aloof on the occasions when he was 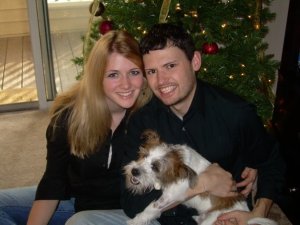 He has grown with us and given us life inside our home: a life to come home to. He is our excuse (albeit pathetic) to leave social gatherings we don’t want to be at since we can’t use the kids one. And although I still want a little puppy, I don’t need one. I’ve got my sweet little man right here at home, wagging his tail when he hears my car pull into the driveway with his tether and stake.