On September 5, 1856, the Arabia set out for a routine trip. Around the town of Parkville, Missouri, the boat hit a tree snag. The snag ripped open the hull, which rapidly filled with water. The upper decks of the boat stayed above water, and the only casualty was a mule that was tied to sawmill equipment and forgotten. The boat sank so rapidly into the mud that by the next morning, only the smokestacks and pilot house remained visible. Within a few days, these traces of the boat were also swept away. Eventually the boat was completely covered after numerous salvage attempts failed. Over time, the river shifted a half a mile to the east.

In 1987, David Hawley, a member of a family in Kansas City who owned a refrigeration company, set out to find the boat. Using old maps and a proton magnetometer, Hawley figured out the probable location, and then found the Arabia half a mile from the river and under 45 feet of silt and topsoil.

With permission from the owners of the farm – and a requirement that the work be completed before the spring planting – Hawley, his brother, Greg, and father, Bob, along with two family friends – set out to excavate the boat during the winter months.

They performed a series of test drillings to determine the exact location of the hull. Once this was done, the perimeter was marked with powdered chalk. Heavy equipment, including a 100-ton crane, was brought in by both river and road transport during the summer and fall. To lower the water level, 20 irrigation pumps were installed around the site to keep it from flooding. The 65-foot-deep wells removed 20,000 US gallons per minute from the ground. On November 26, 1988, the boat was exposed. Four days later, artifacts from the boat began to appear. On December 5, a wooden crate filled with elegant china was unearthed. The mud was such an effective preserver of everything that the yellow packing straw was still visible. Thousands of artifacts were recovered intact, including jars of preserved food that are still edible. The artifacts that were recovered are housed in the Steamboat Arabia Museum. On February 11, 1989, work ceased at the site, and the pumps were turned off.
~History details were gathered from Wikipedia so I didn’t butcher the truth, which I have a knack for doing. 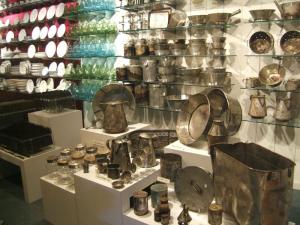 And one fine day in January 2011, Holly & Amber stumbled across this museum by complete accident. It was the most fascinating experience of my life thus far. Yes, more fascinating than birthing a child or having sex or being thousands of miles above land in an airplane.

Amber and I spent hours looking at all the preserved artifacts from the mid 1800s: dug out of the ground under a cornfield where once upon a time the Missouri river flowed. Although they didn’t dig up treasure worth millions of dollars, the excavators dug up a time capsule. There was food and clothes and building materials from people moving out west. David Hawley was there and spoke to us. He was the ungrateful recipient of some of my hand sweat. I felt like I met a celebrity. I bought his book, as all starstruck fans do.

And the entire drive back to Omaha from Kansas City, Amber and I spoke excitedly of our adventure, our words forming sentences which tumbled on top of each other until we had repeated everything we remembered learning. Somewhere among old slates and buckets and keys and pea coats, I rediscovered enthusiasm: I had forgotten what it felt like. Next adventure: to harness that energy, reign it away from an old boat and steer it into my dream; to propel myself with my new enthusiasm: my own paddle wheel.