I haven’t been average weight for my height (or what I call thin) since before Brandon. I used to exercise a lot and the first year Steve and I were married, I actually looked pretty damn good (which for me is in the 140s). Since then, I have still exercised pretty regularly – always keeping goals and trying pretty hard to hit them, just not with quite the same intensity as the first year of marriage. Then I got pregnant with Brandon and didn’t worry about working out since I was going to get fat anyway.

I weighed in at 183 the day Brandon was born. Within three weeks, I was down to 167. And I have never been that low since. I was diagnosed with hypothyroidism about six weeks after Brandon was born. I probably used that as an excuse to not work out as much and not to watch what I ate. I have a god damn condition, after all. How could anyone expect me to be healthy? I stopped watching what I ate altogether and indulged in whatever I felt like. E.L. Fudges? Sure! A quart of ice cream? Don’t mind if I do! Donuts, donuts, and more donuts? Yes, yes, and yes!

Before I got pregnant with Holden, I was already wearing maternity jeans. I never even packed them away after Brandon was born. In fact, those are the only jeans I have worn for about the last three years. I was back up to 183 when I became pregnant with Holden. I was even less healthy in Holden’s pregnancy than I was in Brandon’s. I ate a lot of Peanut Buster Parfaits and Lamar’s donuts. I don’t think you can even imagine how much I mean when I say “a lot.” Steve used to joke that the guys at Dairy Queen had my Peanut Buster Parfait ready for me each night at 8:40. I can count on one hand the amount of times I worked out.

I weighed in at 203 the day Holden was born. I was hoping not to break the 200 mark, but I didn’t do much to stop it, either. When I got home from the hospital, I was only down to 189. Which I thought was rather ridiculous, considering Holden weighed nine pounds himself, plus I hear the placenta is another five. There is a lot more to losing baby weight than just giving birth though, unfortunately.

So I made a goal for myself to get healthy again. I can do a much better job of parenting two young boys if I have more energy. So I stopped eating so much shit. I don’t drink a pop every day now (in fact, I rarely do at all). I have limited my Lamar’s donut runs to once a week (you have to have something to look forward to). The Dairy Queen guys have either wasted a shit ton of Peanut Buster Parfaits or stopped having them ready for me. And I started exercising.

I made a goal of logging 45 miles in May. In my prime, I would log 100 miles a month, but I had just got cleared to exercise again and wanted to give myself a little breathing room as I got acclimated to it again. I finished up the month at 69 miles. On top of that, I also did pilates, yoga, or free weights and crunches 18 times. I had a weight goal of being somewhere in the 160s by June. I didn’t quite hit that goal – I was at 170.4 at last weigh in – so just a half pound away. But what is more important to me than the number on the scale is being healthier. And I am certainly that!

Of course, I have a long way to go. Being healthy never quits, so I keep goals every month regardless of my weight. I still eat out and drink blended coffees. I just do so in moderation (or more of a moderation than before. I don’t think I will ever sacrifice either to less than twice a week). I put away those god damn maternity jeans. I should burn them, really. I am a more active and happier person already, and it has only been a month. I’m hoping by the end of the summer you won’t be able to tell by my body that I have birthed three children. 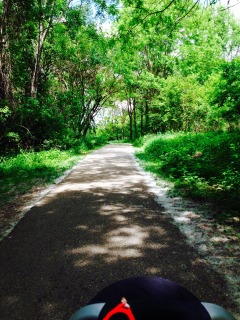 My favorite part of my walk/jog