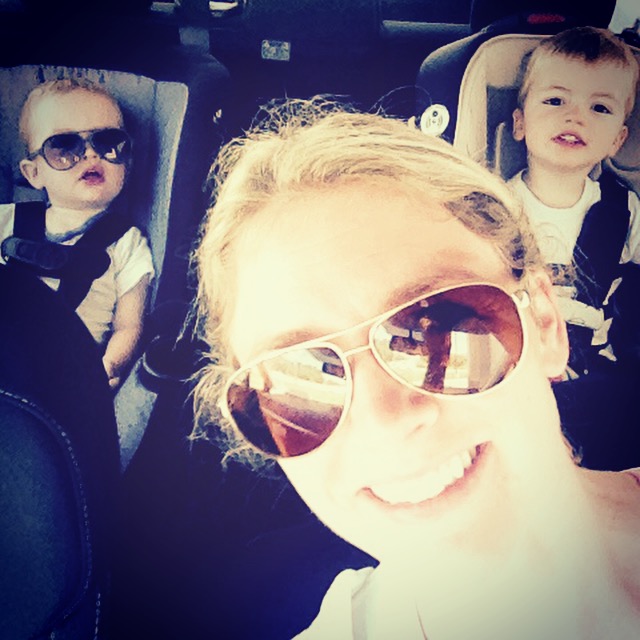 I got a new car last week. My bedpost notches with cars are few: my beloved Saturn, then I drove the Mazda we traded it in for, and recently Steve’s Hyundai Accent. But I have always wanted a black SUV. I knew once I was a mom to multiple kids, I would be an SUV mom. It was meant to be.

So we talked about it then researched cars incessantly (which consisted of Steve actually researching cars, and me pointing out SUVs on the road that I thought looked nice). We whittled our options down to our top few choices, Steve emailed the dealership probably twenty times about our first choice.

We weren’t going to make the same mistake we did last time – showing up at the dealership without knowing much, trading in our car for pennies. So this time, I cleaned out the Hyundai, got it washed, took pictures, posted an ad on Craigslist. The first person to check it out wanted it, so on Tuesday night in the Bag N Save parking lot, we consolidated ourselves to a one-car family.

Wednesday afternoon we dropped the kids off at Grandma’s & Grandpa’s and headed out to buy ourselves a car. The plan was to buy one that day, so I wouldn’t be confined to our house and places I could walk to with the stroller. We went to the dealership of our first choice, met with the salesperson Steve had been emailing. She didn’t remember much, but Steve had a mountain of paperwork printed out and gave her the stock numbers of the cars we were interested in.

Steve test drove the car while I fiddled with the air conditioning and opened the glove compartment. You can tell I’m a real car enthusiast. I’m sure I was real intimidating to the salesperson in the back. Was the A/C blowing hard enough to my standards? Was the glove compartment deep enough? Oh, she’d find out. I’d relay all the information to her with furrowed brow, making sure she knocked off a couple hundred bucks because I don’t play no games.

We went inside, sat down and tried to make a deal. But it didn’t feel right. This was the first car I had seen, and certainly I was missing some information. Perhaps if I had prepared the way Steve had, I would have felt better about it. So we went to three other dealerships. I drove across town, then across the bridge into Iowa. Steve was obviously miffed, but every good husband knows to let the wife have her day now and again. I realized that no car looked as good as that first one, nor was any nearly as good of a deal.

So back we went to the place we started, tails between our legs. In the car, Steve and I discussed using this to our advantage, acting like real heavy hitters once we got inside, rather than apologetic morons. Steve did better than I did. I was just a moron – obviously I had given it away during the test drive. She did sweeten the deal ever so slightly, probably just to be rid of us. We signed away and the black SUV I’ve been dreaming of for years became our’s.

I have never driven a car I loved until now and let me say, we’re just a few days in and I have found a whole new joy in driving. Every day we go somewhere, just so I can be behind the wheel again, smelling the new car smell, smiling at the strong blast of A/C on a hot summer day. Brandon loves it too, saying it’s so shiny and instructing me and Holden not to eat in this car, because we don’t want it to get icky yucky like our last car was. I’m proud of his pride of ownership. I’m joy riding all over town.