It is finished. Six months of training, seemingly endless hours of running all added up to something on Saturday. Because on Saturday, I completed a marathon. I ran a fucking marathon. Just a little history, for those of you who don’t know:

The name Marathon comes from the legend of Pheidippides, the Greek messenger. The legend states that he was sent from the battlefield of Marathon to Athens to announce that the Persians had been defeated in the Battle of Marathon (490 B.C.). It is said that he ran the entire distance without stopping and burst into the assembly, exclaiming “Nenikekamen!” (“we have won!”), before collapsing and dying.
– Wikipedia

To be able to accomplish a feat of such magnitude–yet without dying, preferably–excited me. It became a bucket list item last year. And last October, when my sister did one, I decided I could too. So in January, I signed up, as did my brother Chad. And Amber signed up for it too, this now her third marathon.

I have spent what very little free time I have running. I have cajoled the boys into the basement so I could keep an eye on them while running on the treadmill. I have pushed them around the lake in a double jogger in crazy winds. I have put them to sleep and ran in the pitch dark. I have risen before the family to run before breakfast. I have got my runs in, however necessary. I ran 500 miles this year, before the marathon in preparation for these 26.2 miles.

So there is the background. On to Saturday. It was an overcast day with a chance of rain showers. That is pretty much always the forecast in Seattle, which makes it the perfect place to run a marathon. I had left 104 degrees and found myself shivering once I stepped foot outside the SeaTac airport. I had brought shorts and a tank top, because that’s all I’ve worn for the past three months here in Nebraska. It was a bit cold before the race. My arms were definitely enlisted to cover my nipples.

The race started near the Space Needle. We got there quite early: a full hour and a half before the race started. The race was delayed 15 minutes, and then, we had to wait to cross the starting line until our corral was called. Chad joined Amber and I in the 19th corral, even though his estimated finishing time put him in the third corral (riiiight. Puh-lease). So our 7 a.m. start time had actually become a 7:49 start time. I had made a goal to finish by noon, so I had to adjust my goal a bit.

I don’t know how I didn’t start my Nike app on time. I am obsessed with stats. I keep trivial spreadsheets, for Chrissakes. There is no excuse for someone like me to neglect a tracking opportunity. I had even watched my brother start his Garmin and had brought my iPhone and jerry-rigged a Ziploc bag over its face to prevent it getting ruined from the rain. Oh well.

Things I would do differently next time: 1. Start my tracking at the start.

Finally, the race started. Chad and I have talked on the phone every week since January, and every week the topic of the marathon has come up. We both agree we like to start off strong because everyone is going to peter out at the end, might as well get some good miles in before the inevitable. So we started off quickly – weaving in and out of this sea of people, surging forward. A little before the second mile marker, I remembered my Nike app and started tracking my run. We found a man in an orange shirt and kept pace with him. We were doing 8-something-paced miles. The first eight miles flew by in a breeze.

We lost Orange Shirt at mile eight, because that is where the half marathoners veered their way and us full marathoners went ours. That is also the first time I stopped – at a port-a-potty, then also grabbed some of those energy jelly things. Stopping is not ideal. Your body quickly re-calibrates to not running and cries out to you to stay stopped. I got a side ache, but whatever. It’s just a side ache. I just kept running, bitching only a little.

Luckily, at this point, the route became scenic. Instead of running through rundown Seattle streets, we were running next to Lake Washington. I admired the beautiful houses. We ran through Seward Park, which is basically a forest peninsula on Lake Washington. A slight drizzle started. It was picturesque. The pace was still pretty good: for the first 14 miles, mine and Chad’s pace was never over 10 minutes/mile. I was proud. I was hauling ass. 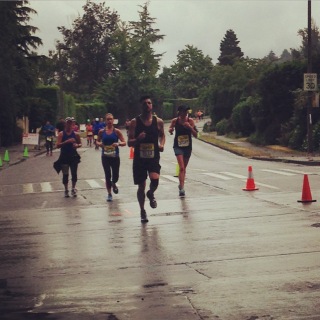 Mile 17, however, was a real bitch. From back around mile 10, I had seen the I-90 bridge. I thought I had read that we would be running over it, but once I saw it, I thought, nah, that couldn’t be right. It’s so far off. I’m almost halfway done, no way we can be running all the way to there, over it, and back and have that be only 26 miles.

Turns out, I was wrong. 26 miles is a long fucking way. That was exactly what we would be doing. Mile 17 was the mile entering the I-90 bridge. It had a short yet sharply inclined hill to climb onto it. So, like everyone in front of me, I stopped to walk up it. Remember what I had learned at mile eight? Stopping is not ideal. Oops.

Things I would do differently next time: 2. Don’t stop running until absolutely necessary.

So that little hill gave Chad and I that feeling of what it would be like to not run, and we were hooked. Stopping makes you notice the aches and pains. We were both cramping up. Chad was legitimately injured prior to this race, and I didn’t want to leave him behind. And let’s be honest, I didn’t want to run at that exact moment, either. We stretched. We tried in vain to relieve our pains. Then we kept going, but walking.

I will say, in our defense, Chad’s walk is really a slow jog. He walks 13 minute miles. I thought this view would save me. I love the water and the breeze that comes off of it. But there was the humming sounds of traffic on either side of us and the sight of other runners cramping up or limping or slowing to walks all around us was anything but encouraging. These weren’t out-of-shape bucket list runners, either. They looked like real athletes, and they were in pain. So who were we to think we could keep going if even they couldn’t?

We kept going, but our 18th mile took 11 minutes, 9 seconds. So much for our good pace. At this point, I estimated what my time would be if I just walked the rest. Could I still finish in under five hours if I walked all the way to the finish line? Not quite. Probably not, at least. And I was going to finish in under five hours. I wanted that finish line because I wanted to stop moving. And five hours would have been finishing by noon, my original goal.

Chad and I stopped to stretch again in the tunnel. The route was pretty good and I have no complaints about it except the I-90 part: You are running where there can be no cheerleaders or spectators and you spend an ungodly amount of time in a dingy tunnel. But at least in the tunnel, the stretch Chad recommended relieved some of my calf pain. So we kept hobbling along – walking, then jogging slowly when it felt right. We were both surprised that the only thing slowing us was leg pain. We had thought we would be winded, out of breath and energy. We were fine waists up – it was just the waists down that were painful.

The last mile I thought would be all glorious downhill, but it teased us. After we ran down, there was this hill to run up. Now we were all trying to run up the hill, unlike mile 17. Now, we could taste the finish, feel it in our cottonmouths. I thought Chad would sprint by me at the finish line, then tease me about being so slow for the rest of my life because he had beat me, but he didn’t. He turned around, grabbed my hand, and we raised them over our heads as we crossed the finish line.

We had lost Amber in the first couple miles, while we were zigging and zagging through people. But sure enough, she crossed the finish line, too. We had all done it. Bitching, injured, under-prepared and everything. We had finished. A half of 1% of people complete a marathon. We are in that tiny sliver of the population. 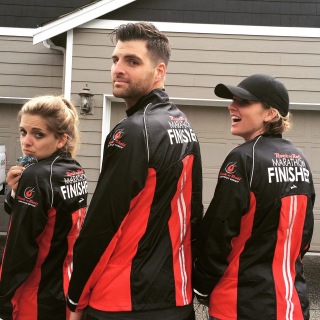 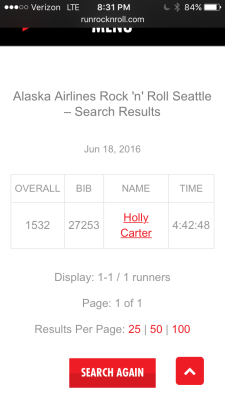 Here is my official race chip time. I know, it’s not great.

Things I would do differently next time: 3. Do the best I can.

Here are my Nike tracking stats, but of course they don’t include the first nearly two miles, the quickest two.

I have said many times while training that this will be my first and only marathon. But the three things I would do over, my desire to PR, to prove how well I can do if I do my best nag at me. But I have to remember: I have two young children at home. My time is precious. My body does not need any more deterioration. I have completed one marathon, which is more than most people will ever do. I was over 200 pounds two years ago, I have birthed three children. What I did was impressive. I have nothing to prove. That was a feat, in and of itself. Not everything has to be one-upped and outdone. Sometimes, we can let things be. Sometimes, we can just finish a marathon, then just sit back with a good book. I’ve proven I can go, now it’s time to stop.

One thought on “marathon rundown”