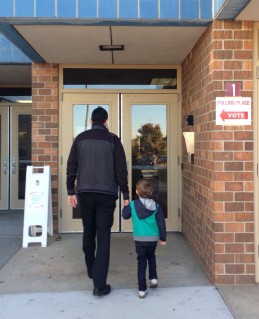 We woke up early today, dressed, and hit the polls. Steve and I with our two little boys in tow: the boys whose America we were shaping with our votes. I was not a voter until this election, but I recently registered, to be a part of history, to one day tell my children that I voted for our first woman president.

I turned on MSNBC tonight to watch the election results. We watched together as Brian Williams co-anchored with Rachel Maddow, not because she’s the token blond reporter but because she is informed and intelligent and deserved the spot. “Clinton! Clinton!” The boys chanted while dancing and spinning. I held Brandon by the shoulders and explained to him why this was so important: how this is the first time in America’s history that a woman could become our leader. And I couldn’t help the tears that formed in my eyes because women are emotional, it’s true, and because politics, like business, are personal, despite what we say.

Although Brandon doesn’t understand glass ceilings or that there are people treated as if they’re less significant than others, he will one day and when that day comes, I will tell him about how when I was pregnant with him, my employer picked my successor without my help: a male without the relevant experience I had who was hired in at $15K more than I was, a male who on the first day told me he was my new boss and made me feel like nothing.

And I’ll tell him about when I got pregnant the next time, with his little brother: how I was working for a different employer and when this chauvinist man who once told me not to hire women because they were emotional or fat people because they were undisciplined heard that I was pregnant, his response was, “post your job.”

I’ll tell him that I worked in HR and saw all sorts of decisions made that were sexist or racist or bigotted and I would lie in bed at night, unable to sleep or sleeping fitfully, thinking of how unjust it was, even in my dreams.

I will tell him that this election wasn’t just about equality between men and women, but also between immigrants and residents and blacks and whites and gays and straights and all sorts of dividing labels we have assigned that shouldn’t be important. I will tell my son that one November night in 2016, him and his little brother and I rooted for Clinton and I knew he meant it because he is like me, despite his gender. He is an emotional boy who loves people most of all, and doesn’t care that they’re different  or if they’re similar, either way we are people who deserve to be treated as such: with fairness and without prejudice.

I knew it because never once did he say, “but she’s a girl!”