Tucker is my (ok, our – whatever) 19-pound wriggly body of hair and tongue that most consider a dog. Sure, he looks like a dog, but he’s more like a little human. He’s like a ten month old child that understands certain words in conversation and is dying to interject, he just can’t speak.

Every time Steve and I are talking about him, his ears perk up and he cocks his head at us – the most unsubtle eavesdropper ever. Even if he’s not the topic, but maybe just a subtext or a tangent, he knows. He also knows to stay away from me when I’m upset, not that I’d hurt him, but because he doesn’t like to hear my voice’s screechy, unreasonable octave. He hides under the table or sits on Steve’s lap as to protect him. Then he also protects me when he thinks I’m in trouble. We have tested him multiple times: Steve will fake punch me and I will wail for help and Tucker will stand between us and growl at Steve.

If I’m sad, he lies on my lap and licks my face for way longer than is necessary. He comes to bed with us and either curls up at our feet or noses his way under the covers. In the morning, I awake to seeing him right next to me: his head on my pillow, his body under the covers, lying on his side: copying my sleep pose. Imitation is the sincerest form of flattery.

Tucker loves the weekend, but hates Monday through Friday at 8 am. He knows we’re about to leave for work, so he tries to convince us to call in and stay at home with him. On Monday he cuddle up right next to me in bed, begging me to scratch his ears. It was so cozy and comfortable and we were both so happy that I felt like a terrible mother when I had to pull myself away. He will also trying biting my pants on my way to the door. I’m not sure if he’s trying to pull me back inside or rip my pants off so I can’t go out in public.

Every day I come home and see him through the window, lying on his favorite chair, the leather one in the library. As soon as he sees me, he jumps up and runs to the door. The other day, while I was wet swiffering, he heard Steve’s car pull into the garage and ran across the wet floor. He just couldn’t keep his four legs coordinated. He looked up at me as if to ask why I had done that, then remembered his mission and ran to the garage door. 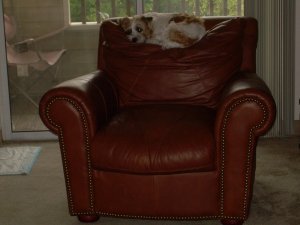 He loves to play. He will make you tug at the toy in his mouth for hours before he will give it up. He likes you to throw him a ball outside, but he can’t catch it in his mouth. Instead, he traps it like a cat would with his two front paws. If you buy him a new toy, he will have the stuffing out of it within a day. There’s only one toy still intact, and that is “Ralph” the indestructible stuffed dog that looks very similiar to Tucker himself. 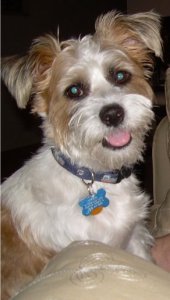 Don’t even try to pick Tucker up while you’re standing: fully extended. He is afraid of heights and will jump right out of your arms. Don’t try to spray him with the hose or give him a bath because he’s scared of water, too. But he acts tough and barks and growls at dogs even three times his size. He is never mean to a person, but avoids the ones he can tell don’t like dogs. Maybe he’s considerate, or maybe he’s just greedy for attention from those who will give it to him.

I can’t imagine life without our hairy little mutt. Even though I originally picked his sister out from the litter. But she didn’t do, because I had his name picked out even before him, so he had to be a boy. Call it destiny.