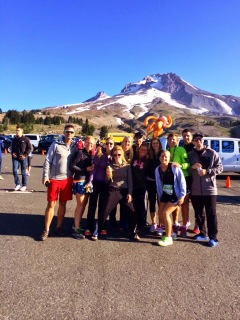 Here’s where I was this weekend. My family and I completed the Hood to Coast relay. If you haven’t heard of this, it is a 199 mile relay race with 12 people on a team. We run from Mt. Hood to the Pacific Ocean. One of us is always running until it is over, which in our case was 31 hours.

I was in a minivan with my aunt, three siblings, and sister-in-law. The running part wasn’t bad. It was actually pretty awesome to run at four a.m. in the pitch black and to hear a screech owl and see the stars and feel the mountain mist. Then I ran the final leg which meant running down through a forest and out to the beach which was pretty awesome.

The hardest part of the whole thing is being crammed into a van for a day and a half with five other people and not being able to sleep. There were definitely a few meltdowns. A smart person takes every second they can to sleep, or at least close their eyes and fiend sleep.

My times weren’t fast, but I ran over 16 miles without sleeping and just five months after having a C-section. And I never stopped and walked. Even when everyone else was. I beat some personal bests. I even passed more people than passed me. By quite a ways. I don’t claim to be an athlete, but doing a relay like this makes anyone feel invincible.