Well, he’s done it. Steve has graduated with his MBA. 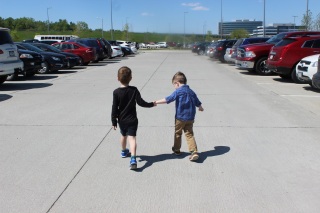 I took the boys to the graduation.  I could get Holden in respectable attire, but I gave up on Brandon.

But the good thing about big schools is that they have graduation ceremonies in arenas with snack bars.

We sat in the very top back row at Brandon’s request and I took the iPad and when daddy’s name was called, we cheered and somehow he heard us from all the way in the back.

We did leave a bit early, after dad’s name, because it wouldn’t end. We went to Target. Dad came and met us.  We broke into smiles, seeing him in his full graduation gear.

We went out for pizza which seems like a nothing celebration given that it took three years for this achievement. But when you have kids and they are quiet at restaurants, that is a celebration.

I am proud of Steve’s achievement, proud of the example he sets for our boys. About hard work and being a lifelong learner, of course, but mostly, about not giving up. Most people give up. Not us.

We are just two grad students trying to raise two kids and work two jobs without cracking.  Maybe we’re getting there. The cap and gown and honor society tassels seem to prove it.