Steve and I often marvel at how Holden has never been sick. We chalk up our good fortune to not sending him to daycare. Just another wise parenting choice we have made! We are awesome at this! And then on Monday night, he got sick. Monday night was the first time I’ve ever seen projectile vomit. It actually happens; it’s not just in the movies. Vomit can come out of a mouth and go somewhere other than down. It went in my eye, in Steve’s beard, and over every stainable fabric in the room. I would have laughed if I wasn’t so freaked out. There is nothing funny about a child under the age of one being in any danger whatsoever. Sometimes I even worry the TV could give him seizures, that’s how anxious I am about babies. It doesn’t help that when you’re pregnant you are pumped full of terrible scenarios that could happen to your baby! SIDS, suffocation by crib bumper, drowning in the bath tub – parenthood preparation is basically just worrying on crack.

He woke up in the middle of the night screaming. This kid is loud anyway, but his pain scream is unbearable. I thought it was a death scream. At 5 a.m., I called our pediatrician’s on-call nurse. She spoke to me a little too calmly like I was worrying over a god damn spider crawling towards me, not like my baby could be dying. She explained that there was really no need to do anything besides give baby medicine for a “low grade fever.” I didn’t think 102 was low grade. In fact, my hasty internet search told me to go to the Emergency Room if his fever was over 100.4, so if anything, I thought I was under-reacting. At a more godly hour of the morning I texted my friend the nurse to be get some affirmation from another mother with nurse training that my son would live. She shared my concern, but also affirmed that he would live. Just what I needed to hear.

I think we’re out of the woods now. I mean, he actually cracked a smile for me today. And per the usual, he tried ripping the Christmas lights cord out of the outlet and chewing on things he has no business chewing on. He is basically like a puppy but with opposable thumbs and better height. So, your worst nightmare. And that’s when he’s healthy. So glad he is back to himself. 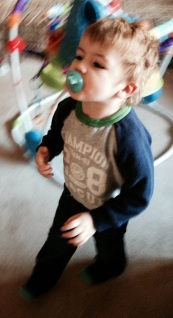 Brandon was a near angel for me while Holden was screaming incessantly. He quietly entertained himself. And yes, I discovered later that he was playing with hairspray and screwdrivers, but nothing blew up. He found the infant pacifiers because I left the lock off the medicine cupboard, but I can live with that.

Yesterday while I was addressing Christmas cards, he climbed up on the desk so he could help. 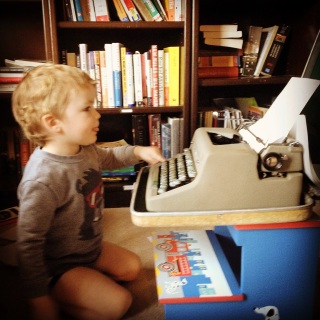 I was sitting at my desk again today (this time I wasn’t being quite as constructive, just trying to find what I should buy with my Gap Cash), and this time he pulled out this typewriter. This was my mom’s high school graduation present and as I have a bit of a fetish for typewriters and she has no use for it, she passed it along to me. Now apparently I passed my fetish along to Brandon because he was mesmerized. “I’m playing the computer, mama!” he reported with glee.

Let’s be honest, I kind of let this kid run amok and do his thing this week. And don’t mind all the pants-less pictures: today was my first attempt at potty training. I heard that if you just put them in underwear, after they pee themselves, they’ll want to use the toilet because they won’t like the sensation of it running down their legs. Well, my kid didn’t seem to mind it at all. He peed through four pairs of underwear and never once notified me. I just kept discovering it when I would try to force him to use the potty and his underwear were already wet. Well, no one said parenting would be easy, right? Or maybe I just didn’t take them seriously when they said it was hard. Nothing is hard for me! I’m awesome! Oh wait, parenting is. I’m not that awesome. I was awesome at not having to do anything hard, I suppose. But these new twists and turns that these kids keep throwing at me can’t actually be a skill people inherently have. I think we all just learn what to do as it happens.

You shouldn’t be putting all this pressure on yourself. They don’t start this age. They don’t start out as big as Max. They start out little and tiny and they don’t talk or do anything but poo. You can handle that. And then eventually you work your way up into insanity.
~ 11.6.14 episode of Parenthood